This week, the United Fresh Produce Association held a webinar to look at what impact the results of the election might have on the produce industry, now that the results of the election have become much clearer. The webinar featured a panel composed of John Hollay, the Senior Director of Government Relations for United Fresh, Mollie van Lieu, the Senior Director for Nutrition for United Fresh, as well as Randy Russell, who leads the Russell Group. 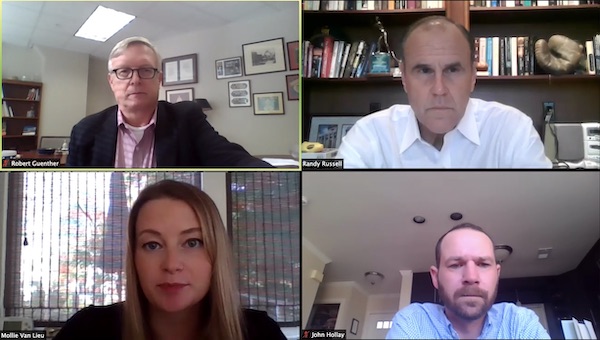 General overview of the results
To kick off the webinar, Russell provided a general overview of the election results, specifically with regard to the House of Representatives and the Senate seats. “The Democrats held their majority in the House of Representatives, though their 17-seat advantage has decreased with the Republicans picking up five seats so far, and possibly picking up at least two or three more when all the votes have been counted. In the Senate, the Republicans maintain their control for now, but this could change when the runoff in Georgia is determined on January 5th, where two Senate seats hang in the balance,” he says.

In addition to the general seats in the House and the Senate, the Agriculture Committees in these bodies are also seeing some changes. “We’re seeing a major changing of the guard for the House Agriculture Committee, with the retirement of Pat Roberts and Mike Conaway, as well as the loss of Collin Peterson, who has been voted out as Chair. These three have a collective service of 85 years, so these are big shoes to fill,” says Russell, adding: “GT Thompson of Pennsylvania, Austin Scott from Georgia and Rick Crawford from Arkansas are vying to replace Conaway, but the date for that election has not yet been set. The Democrats will pick their next chairs in the first week of December and the race is currently between David Scott from Georgia and Jim Costa from California.” Van Lieu adds: “Chairman Peterson has endorsed David Scott for that position, so that certainly will change the dynamics there.”

In the Senate, Russell believes that the stature of Debbie Stabenow will be increased moving forward and that we’ll see John Boozman come in as Chair for the Senate Agriculture Committee. “That will depend on the outcome of the January 5th runoff race,” Russell says. “Boozman has a very good working relationship with production and agriculture and is a strong advocate on hunger and nutrition issues, so I think he and Stabenow will work very well together,” he says.

Van Lieu adds: “Another important race for our industry is the outstanding race between David Valadeo and TJ Cox in California for the 21st Congressional District, because TJ Cox is on the Agriculture Committee. Two seats on the committee have flipped from Democrats to Republicans.”

Policies and trade
With an eye toward upcoming policies and bills, Hollay shares: “The new Farm Bill is coming up, and there will also be some work on the Child Nutrition Reauthorization, which we have been working on. I think we are in a good position in the Senate – Stabenow has been a champion for us for many years, and Boozman is the co-founding Chairman of the Senate Hunger Caucus, so that I think that will bode well for us. Then, there’s obviously the looming issue of what will happen with a new Covid-19 relief bill – there’s already been a lot of discussion about this but the size of the package is still being disputed. The package proposed by the White House is $1.8 trillion, from Pelosi the package is $2.2 trillion, and Mitch McConnell is at about half a trillion dollars so there’s a big gap to overcome there. Now with the news about Pfizer’s vaccine nearing approval, these numbers might also be adjusted.”

The possibilities of how trade might be impacted has been discussed at length in previous webinars prior to the election results being clear. Agreeing with the main ideas discussed by other panelists in other webinars, Russell believes that the Biden administration will have a greater focus on multilateral trade negotiations with less of an emphasis on using tariffs as a mechanism to try to change behavior. “One of the first focuses will be on getting an agreement with the UK, which will hopefully also leverage some agreement with the European Union, though I don’t think either of those will be particularly easy. With China, I think the Biden administration can ill afford to change their tack – though they may try to lower some of the tariffs that have been put in place to see if there’s any reciprocity for that.”

Immigration and Child Nutrition Reauthorization
United Fresh has been pushing for immigration reform for many years, Hollay shares. “This will be an important issue for the Biden administration’s constituents, and I think the best way to approach it would be through bipartisan support. Remember, we got the Farm Workforce Modernization Act through the house with 30 Republican votes. I think we can get a good reform bill that takes care of both the current and future workforce, if we play our cards right,” he says.

With regard to the Child Nutrition Reauthorization, which impacts the school meal programs as well as other key programs that include fresh fruits and vegetables, van Lieu shares: “There is a relatively narrow window to get something done for this, because in 2021 the Senate will move to looking at the farm bills. It is long overdue, because it’s supposed to be renewed every five years, and the last time it passed was in 2010. With the challenges that schools are facing because of Covid, – we don’t know when they’ll reopen and what kind of long-term impact we’ll see, I think that’ll take up a lot of the conversation. If the Republicans keep control of the Senate it’ll be more difficult to push something through, though I do think it’ll be easier under the Biden administration than it would be under another the Trump administration.”

Early next year, United Fresh will start doing some meet-and-greets with the new members of Congress. “We’re excited to get this going, and we look forward to working with everyone to help us move the important issues forward in a new Congress and the new administration,” Robert Guenther, United Fresh’s Senior VP of Public Policy, concludes.

Nutritional quality seen in movies gets 2 thumbs down

This Vegetable Ricer lets you switch to a healthier diet after your Thanksgiving binge!