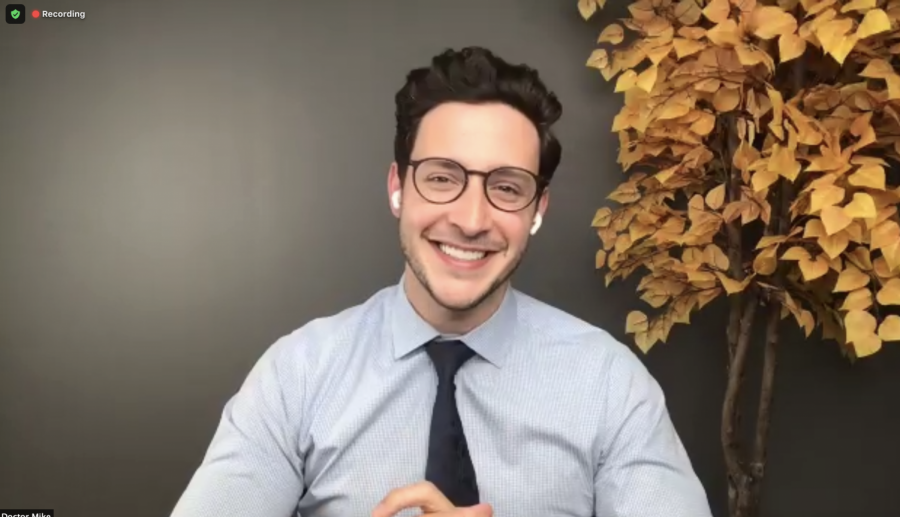 On the eve of Pitt’s first-ever self-care day, students tuned in for an event different than those typically on the University’s calendar — Pitt Program Council’s live mental health Q&A with Doctor Mike, who People magazine dubbed “the sexiest doctor alive” in 2015.

With his charming smile and quaffed brown locks, there’s no doubt that Dr. Mikhail Varshavski, known as “Doctor Mike” to his almost four million Instagram followers and more than six million YouTube subscribers, is soft on the eyes. But Varshavski isn’t just a pretty face — he’s a certified family doctor who practices in New York and a social media influencer known for health advocacy and laid-back videos, like one where he gives his take on an episode of “Grey’s Anatomy.”

Most of the discussion Tuesday revolved around how students can practice self-care while going to college during a pandemic. Self-care, according to Varshavski, means being introspective and listening to your mind and body.

The event’s open Q&A format allowed students to ask Varshavski for advice on how to handle situations pertinent in their own lives. In response to a student’s inquiry about how to find academic motivation in a virtual environment, Varshavski encouraged the audience to be excited about learning things that interest them and to find ways to incorporate the information into their daily lives.

“Instead of studying to get a good grade, be excited to learn about it and you’ll do even better,” Varshavski said. “The hallmark of a wise person is not one who knows a lot of facts, it’s one who has a lot of knowledge but can incorporate it into everyday ideas, conversations and jokes.”

Throughout the one-hour Q&A, Varshavski often focused on this same idea of using the bigger picture to ease the current anxieties students may have. But he did so while also addressing the reality students now face amid the COVID-19 pandemic. Varshavski said during difficult situations like these, we need to take time for positivity, something he said we can achieve by addressing our emotions.

“When you connect to your emotions, you’re able to see where the darkness is, where the light is, and not being afraid to go to the light at times of stress is really important. Do not feel like you have to punish yourself,” Varshavski said. “You still need to laugh. You still need to smile.”

Caleb Tsai, a first-year computer science major, wasn’t aware of Varshavski’s social media presence until he saw the Outside the Classroom Curriculum post the event on the Suitable app. Even though he wasn’t already a fan of Varshavski, Tsai said his talk gave him a new perspective on his situation.

“One part that stood out was gratitude,” Tsai said. “Even though [there’s] COVID, at least we have the chance to be on campus and have online classes, even though technology sucks most of the time.”

Johnston said her inspiration for the event stemmed from her involvement on SGB’s Mental Health Awareness Month Planning Committee, which had the idea to bring in local professionals to talk about mental health. Johnston, a fan of Varshavski, wanted to see how far she could take the idea.

“I was scrolling through my YouTube feed and I saw Doctor Mike and thought, ‘You know, that might do really well, that might work exactly how I want it to,’” Johnston said.

Johnston guessed correctly. According to Danielle Moss, a senior neuroscience major and PPC’s public relations director, 148 people shared the event on Instagram alone, making it one of the Pitt Program Council’s most shared posts by a wide margin in recent history.

In the middle of the semester, online classes may feel like a drag, but Varshavski brought some light to the virtual world, encouraging Pitt students to ease their anxieties by focusing on what’s in their control.

“Do not worry about the future, focus on the immediate challenge ahead of you, solve it and celebrate that you solved it,” Varshavski said. “As I say on my YouTube channel plenty of times, stay alert, not anxious.”

Silos in healthcare are bad for us. Here’s the solution