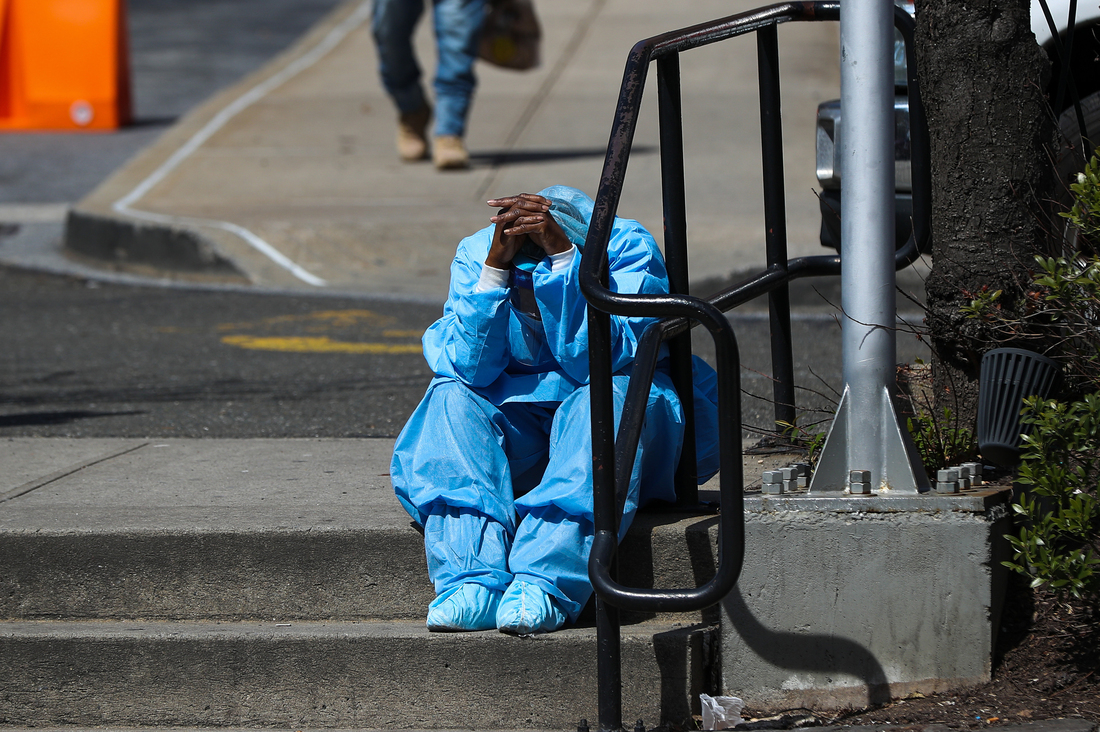 A fatigued health care worker takes a moment outside the Brooklyn Hospital Center in April. Many hospital workers these days have to cope with horrific tragedies playing out multiple times on a single, 12-hour shift. 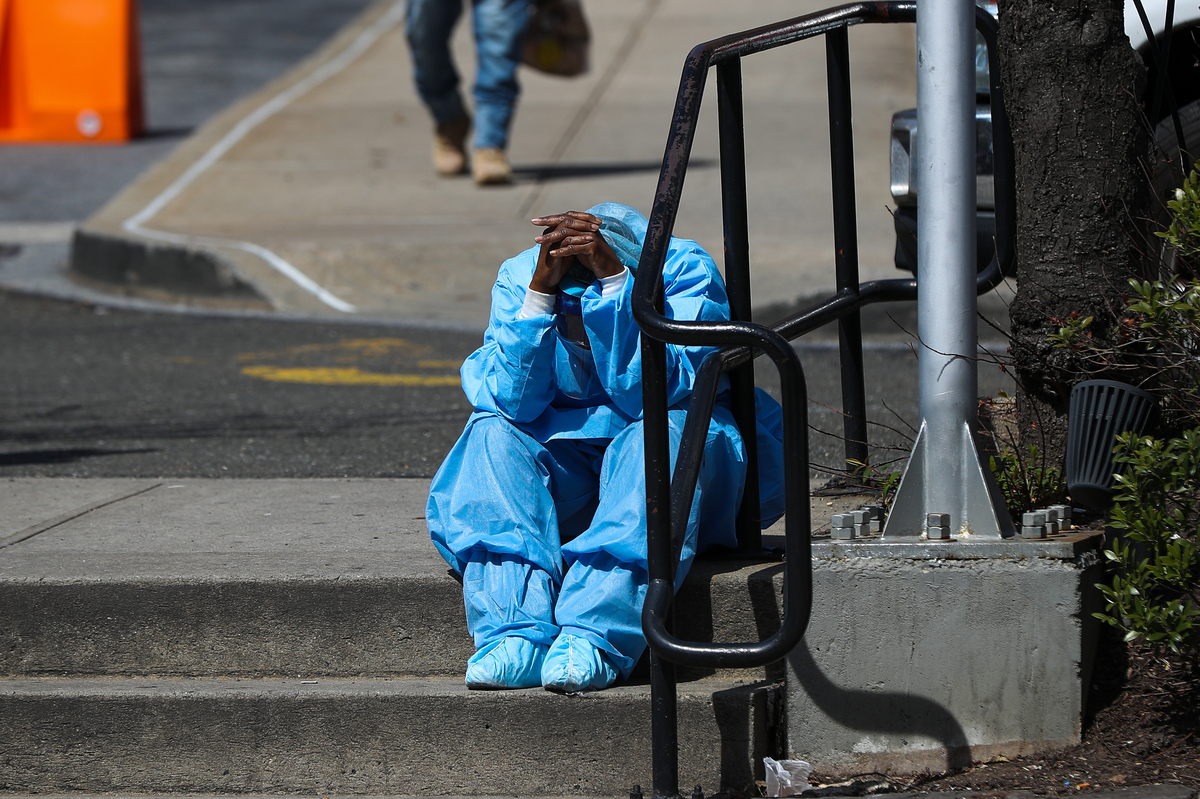 A fatigued health care worker takes a moment outside the Brooklyn Hospital Center in April. Many hospital workers these days have to cope with horrific tragedies playing out multiple times on a single, 12-hour shift.

The scene at the Montefiore Medical Center in the Bronx is unlike anything psychiatrist Bruce Schwartz has seen. Everyone, even interns and nurses in training, have been tapped to tend to the flood of COVID-19 patients, who are crashing and dying at rates comparable to the front line of a battlefield.

“We’re very much in the center of the epidemic,” Schwartz says. Overworked and burned out, hospital staff are all coping with horrific tragedies playing out multiple times on a single, 12-hour shift. “It is really a very horrendous experience that no one could possibly be prepared for,” Schwartz says.

Hospital workers around the world face similar, sustained trauma, and it’s taking an emotional toll. A recent study underscored the severity of those risks: Half of Chinese health care workers studied who treated COVID-19 patients earlier this year now suffer from depression. Nearly as many — 44.6% — have anxiety, and a third have insomnia.

Schwartz, who is also president of the American Psychiatric Association, says hospitals like his are offering teletherapy for their own staff. But he expects the need to only grow: “After this epidemic lets up, we’re going to see a great deal of post-traumatic stress.”

Medical professionals, in other words, will be the patients of tomorrow. And Harvard psychiatrist Roy Perlis worries health care workers will be reluctant to seek care.

“It’s well-known that docs don’t make great patients,” Perlis says. “We feel like we should be able to take care of ourselves. Look, I’m a psychiatrist and I don’t even like psychiatrists. I think there is still an awful lot of stigma in particular in seeking help.”

But Derek Villareal, an intensive care nurse at the Manhattan Veterans Affairs hospital, speaking as a representative of the union National Nurses United, says he looks forward to starting therapy when his schedule lets up. The stresses he faces at work are myriad: Basic safety gear remains in short supply, and he says staff members get testy. “When the house-cleaning crew comes up and asks for masks, we actually get upset” and start bickering with each other, he says. 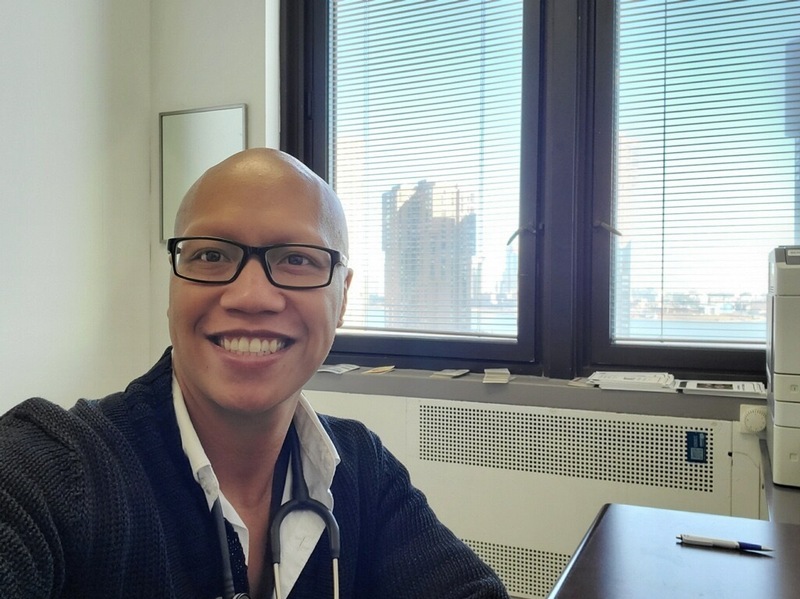 Derek Villareal is an intensive care nurse at a hospital in New York. Being a good nurse means caring for families, too, he says, with timely information that’s comforting. That’s become a lot harder in the crush of COVID-19.

And there’s lots of other drama playing out around them: Not every patient gets a lifesaving ventilator, for example. And the medical staff can’t clean patients of the tears and saliva that build up on their faces. On his hourlong commute home every day, Villareal is haunted by the constant stream of desperate calls from loved ones. A patient’s family members aren’t permitted to visit, and Villareal has no time to comfort them.

“We’ve been so inundated with phone calls, it’s hard to talk about the death process with very concerned family members,” Villareal says. “Again, these are things that really take you away from feeling like you were a good nurse that day.”

Psychologists have a name for that kind of feeling: “Moral injury.”

Sacramento ER nurse Ramona Moll feels that when she cannot touch or comfort her patients. They can’t hear her over the loud whirr of ventilators and fans. It feels impersonal and cruel.

“You almost feel like a robot, because you can’t communicate with them, you can’t explain to them; the best you can do is, with your eyes, show compassion,” she says.

Moll works at the University of California, Davis Medical Center, where last month she also became a patient. She contracted the coronavirus, she believes, treating other people. Alone in her hospital bed, she monitored her own breathing and lived the terror she saw in other patients.

Moll has since been discharged and is convalescing at home. She says morally she feels compelled to return to work and fight alongside her exhausted colleagues. But emotionally, she says, she still struggles with the fears of reinfection and death.

Local therapist gives tips for mental health leading up to the holidays – KRCRTV.COM

Why are some children taller? Diet a bigger factor than genes – South China Morning Post

Health-care workers under pressure with surge in U.S. cases; air travel picking up

Phishing attacks most common cybersecurity incident at US healthcare organizations

How to apply all 8 limbs to your daily life