Michigan Medicine laying off hundreds of workers despite ongoing pandemic

Michigan Medicine laying off hundreds of workers despite ongoing pandemic

Michigan Medicine, the wholly owned medical center of the University of Michigan, is moving ahead with mass layoffs even though COVID-19 cases in the state have spiked since mid-June.

Two months ago, the Ann Arbor-based hospital chain, formerly known as the University of Michigan Health System, announced an “economic recovery plan” that included the elimination of 1,400 positions. After achieving nearly half of its target through forced retirements and “voluntary” furloughs, management has moved ahead with the layoff of 738 nurses, technicians and other health care workers.

In a statement, Michigan Medicine said it lost $230 million in the fiscal year ending June 30, 2020, largely due to the cancellation of elective procedures as hospitals treated COVID-19 patients. Medical center officials predict the losses will continue throughout the rest of the calendar year. At the same time, they claimed their cost-cutting plan would “minimize impact on employees and ensure high standards of patient care.” 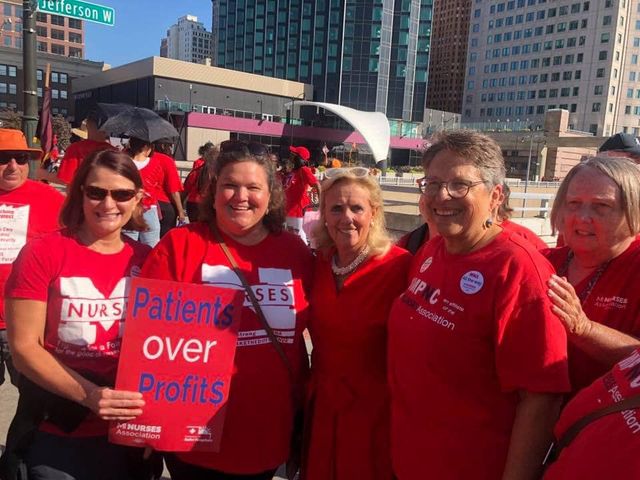 Contacted by this reporter, a spokesperson for Michigan Medicine said about 60 nurses, who are members of the University of Michigan Professional Nurse Council (UMPNC), had been given “Reduction in Force” notices. In addition, 38 emergency technicians were laid off, leaving only 12 EMTs.

Workers and patients at Michigan Medicine refuted the claims that the layoffs had not impacted the quality of care and conditions for health care workers. As one long-term Michigan Medicine cancer patient told the World Socialist Web Site, “The hospital has laid off hundreds of people including key personnel in the cancer center. When I went in for chemo last week, the tension was palpable. Nurse Practitioners who are retiring are not being replaced, putting enormous added pressure on the oncologists. The delivery of complex and life-saving treatment is, in some cases, being shifted from RNs [Registered Nurses] to LPNs [Licensed Practical Nurses], who have far less medical education.

“It is very disturbing to feel that my care may be compromised,” she continued, “as complicated issues always arise during treatment. These measures and many more cuts are saving the hospital a ton of money but putting undue strain on patients and staff. As my oncology nurse of long standing said to me, ‘They are expecting us to do more for less pay.’ The cancer ward is already an area of acute tension for patients and care-givers, which will only increase.”

One worker commenting on the layoffs said, “I am genuinely confused about this. I’m just asking, didn’t we have a shortage of health care workers not too long ago? Now they are laying them off? How are they preserving jobs? All I see is a them preserving a big fat payday for the CEOs.”

In late March, corporations around the country including large hospital chains like Ascension, HCA Tenet, Providence and others received billions through the bipartisan CARES Act to cover their losses even though they had huge cash reserves and financial and real estate investments. From the beginning of the pandemic outbreak to May, the hospital chains laid off roughly 1.5 million health care workers. When it came to the corporate bottom line, hospital executives had no problems cutting the jobs of hundreds of thousands of workers whom they had previously hailed as “heroes.”

In the meantime, the salaries and bonuses of the top executives have hardly been touched. In a publicity move coinciding with the layoff announcement, Michigan Medicine CEO Marschall S. Runge announced he was taking a 20 percent cut in his base salary. This left him with a paltry $1.12 million, plus investment income. Last year, Runge received a base salary of $1.4 million, up $450,272 from 2018.

According to the Bureau of Labor Statistics, the national average salary for RNs was $73,963 annually. LPNs make $48,673 a year. Wages continue downward for other hospital staff.

In September 2018, after the University of Michigan Professional Nurses Council (UMPNC) kept them working for months after the expiration of their labor agreement, Michigan Medicine nurses voted by 94 percent to strike, The main demand of nurses was a reduction of dangerously high patient-to-nurse ratios, an issue that has only been worsened since the pandemic for nurses throughout the country and the world.

Ignoring the strike vote, UMPNC agreed to a concessions contract that has paved the way for the current round of layoffs.

Shortly before the expiration of the nurses’ contract, the University of Michigan announced a new program called “Victors Care,” a system of primary care aimed entirely at servicing the rich and upper middle class. Billed as “the latest advancement in patient satisfaction,” this class-based system promised easier and faster access to physicians, as well as comprehensive preventive care, for those who could afford to pay an additional $3,600 per year out of pocket.

On its web site, the program listed benefits such as 24-hour telephone access to a primary care physician, ability to meet with a physician away from the hospital to avoid long waiting room experiences and parking costs, exercise and nutrition counseling, no time limits for doctor visits, and a personalized treatment plan with an array of yearly preventive care appraisal tests.

The layoffs will have a devastating effect on hospital workers who bore the most difficult burden as the pandemic in the state peaked in March and April. In a recent article, titled, “This Spring They Were Heroes, but Summer May Be Cruel for Health Professionals,” University of Michigan’s Health Lab said the deadly virus “has left tens of thousands of doctors, nurses, therapists and others with a real risk of ongoing depression and even post-traumatic stress disorder.”

The article added that this psychological toll “could be compounded by financial pressures, as health systems ramp back up for in-person care, and try to make up for the revenue lost this spring through added clinical care duties or layoffs.”

Build rank-and-file safety committees at every workplace to save lives!

Insane Medicine, Chapter One: The Medical Model of Mental Health Is Finished

Peloton and Planet Fitness Pumped for Pandemic Workouts. Here’s Why.