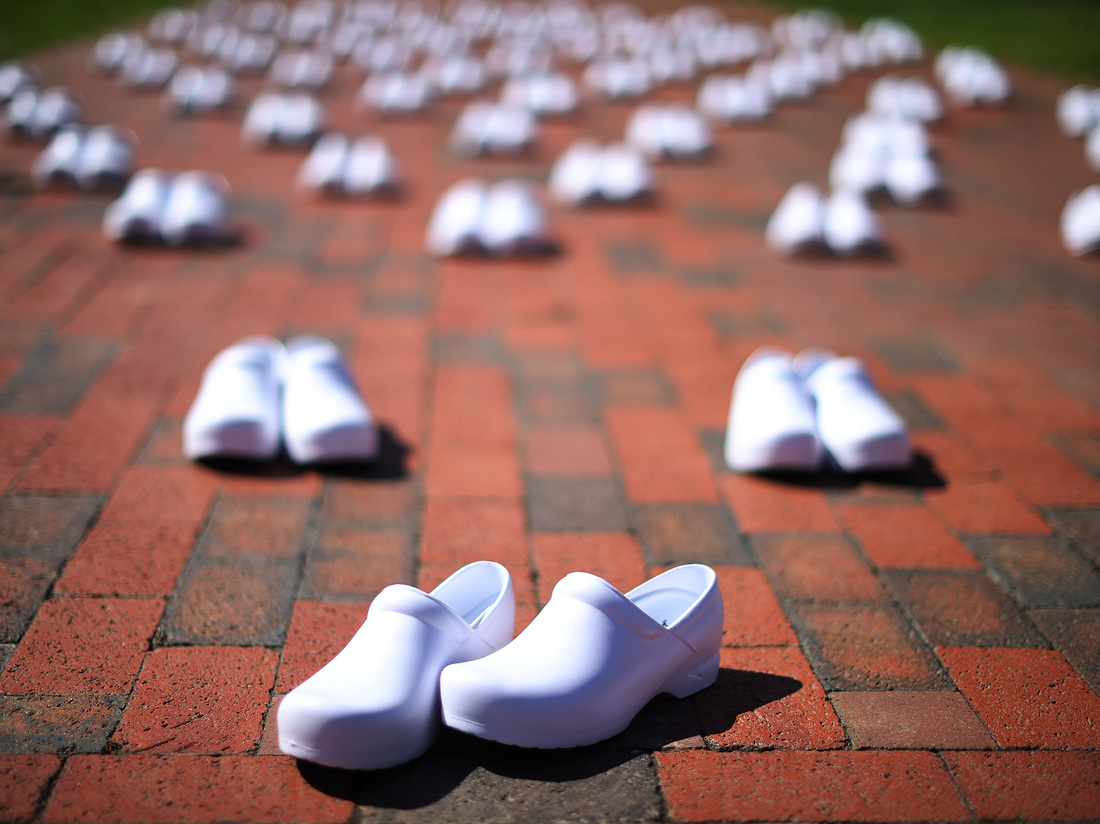 National Nurses United set out empty pairs of shoes for nurses who have died from COVID-19 while demonstrating across from the White House on May 7. The union is asking employers and the government to provide safe workplaces, including adequate staffing. Hospitals have been laying off and furloughing nurses due to lost revenue. 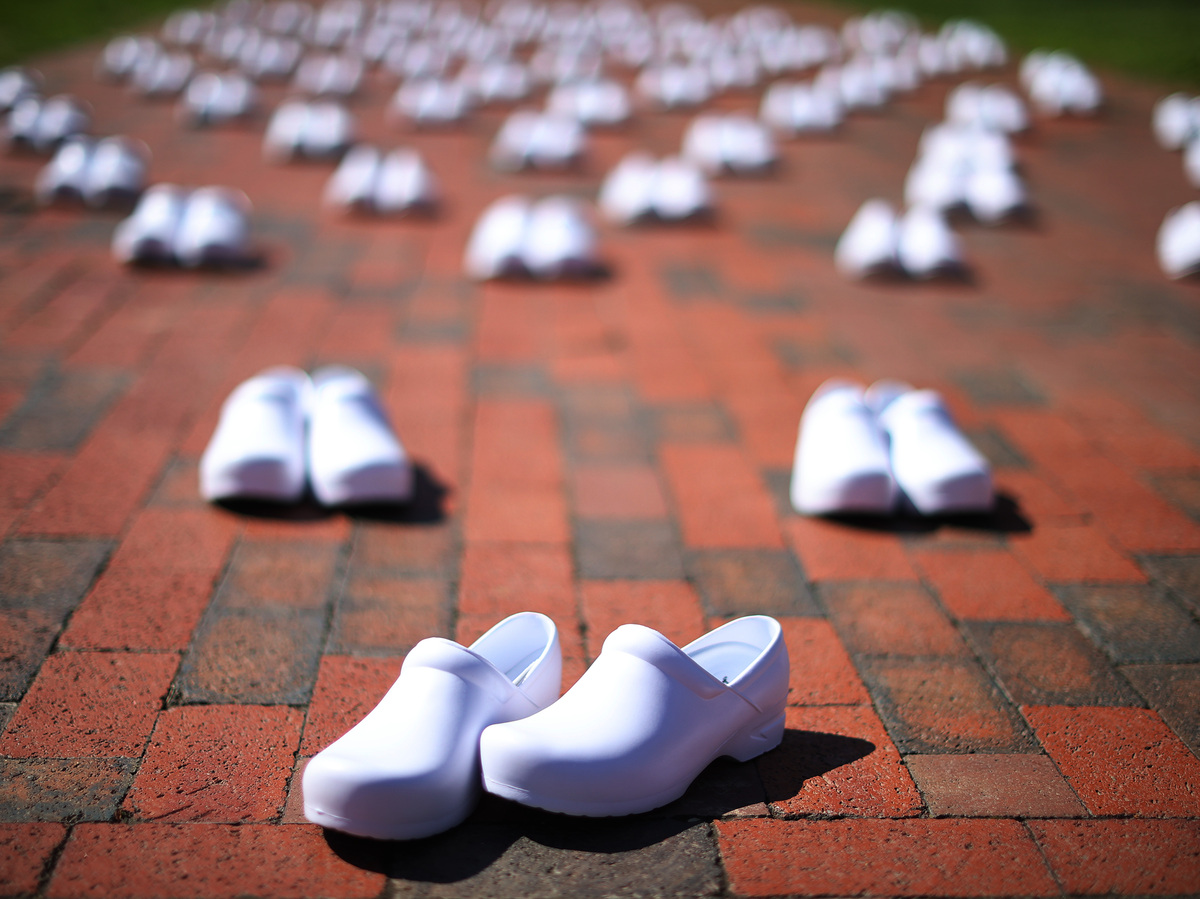 National Nurses United set out empty pairs of shoes for nurses who have died from COVID-19 while demonstrating across from the White House on May 7. The union is asking employers and the government to provide safe workplaces, including adequate staffing. Hospitals have been laying off and furloughing nurses due to lost revenue.

Michelle Sweeney could barely sleep. The nurse in Plymouth, Mass., had just learned she would be furloughed. She only had four hours the next day to call all of her patients.

“I was in a panic state. I was sick over it,” Sweeney said. “Our patients are the frailest, sickest group.”

Sweeney works for Atrius Health as a case manager for patients with chronic health conditions and those who have been discharged from the hospital or emergency room.

“It’s very devaluing, like a slap in the face,” Sweeney said. “Nursing is who you are … I’ve never been unemployed my entire life.”

It’s an ironic twist as the coronavirus pandemic sweeps the nation: The very workers tasked with treating those afflicted with the virus are losing work in droves. Emergency room visits are down. Non-urgent surgical procedures have largely been put on hold. Health care spending fell 18% in the first three months of the year. And 1.4 million health care workers lost their jobs in April, a sharp increase in the 42,000 reported in March, according to the Labor Department. Nearly 135,000 of the April losses were in hospitals.

Fae-Marie Donathan was among those who filed for unemployment in April. A nurse for 42 years, she worked until recently as a per diem nurse in the Surgical ICU at the University of Cincinnati Medical Center. As the pandemic took hold in the U.S., Donathan, 64, expected her skills to be essential, but was recently told she would no longer be scheduled.

“I was thinking maybe I would have to worry about when I was going to get a day off,” Donathan says. “I was thinking totally the opposite, never ever suspecting that I would be sitting at home not getting any hours at work.”

Donathan says she normally makes around $1,100 every two weeks; she says her last paycheck was $46 in take-home pay. Asked for comment, a spokesperson for the University Of Cincinnati Medical Center said in an email that the health system “like many others, has experienced financial challenges as a result of the pandemic and has taken steps to align staffing with current needs as we seek to avoid layoffs.”

The University Of Cincinnati Medical Center is among many: The American Hospital Association recently predicted that U.S. hospitals and health systems would end up taking a $200 billion hit over a four-month period through June. Most of that money — $160 billion — is from lost revenue from more lucrative elective procedures.

“The only people who are coming into the hospitals are COVID-19 patients and emergencies,” says American Hospital Association Executive Vice President Tom Nickels. “All of the so-called elective surgery, hips and knees and cardiac, etcetera, are no longer being done in most institutions around the country.”

Nickels says hospitals are in a tight spot: “They’re still having to have their institutions open. They are still caring for people who come in. They are still taking care of COVID-19. But that’s an enormous amount of lost revenue.”

The revenue losses will more severely affect poorer and more rural hospitals whose finances may be marginal in the best of times, Nickels says.

“That is certainly an existential threat,” he says. “And I think [it] will threaten the ability of some of these hospitals to remain open.”

Some nurses have traveled across the country to hot spots like New York City to find work, unsure if they’ll have a job when they return home. But even there, hospitals that were once swamped are finally coming up for air and administrators are now reckoning with the financial impact of the pandemic. 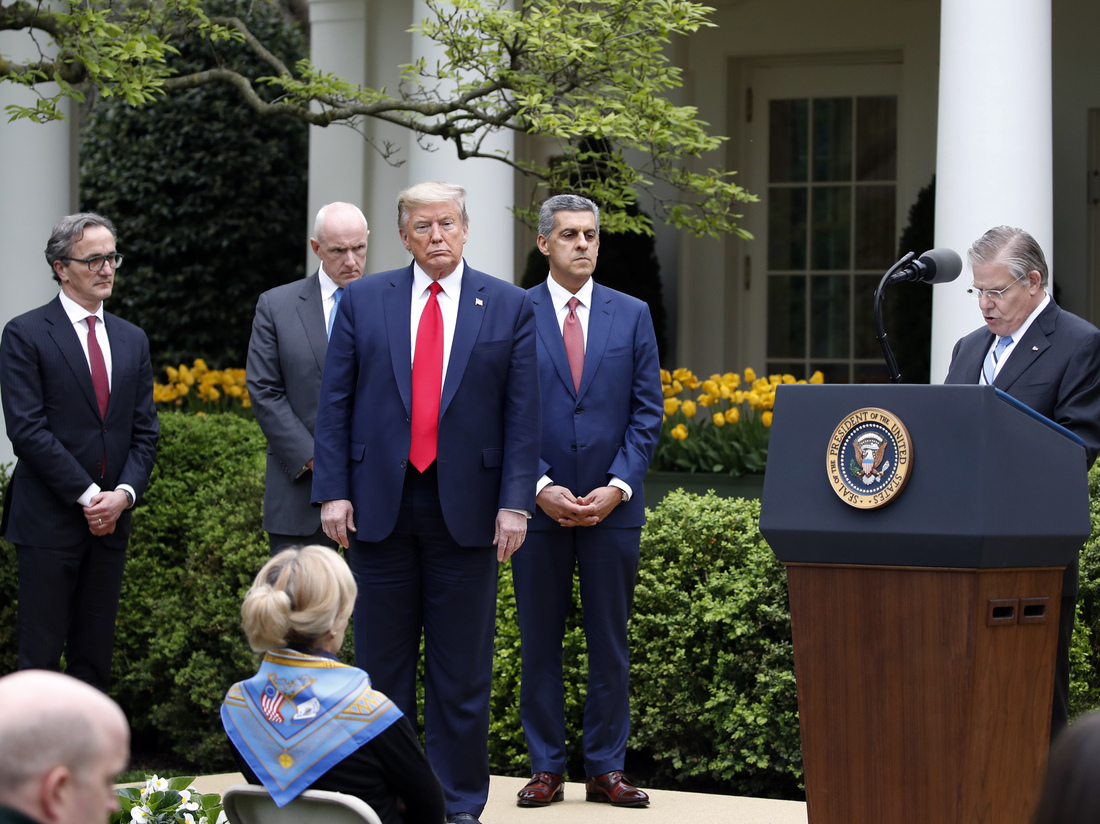 President Trump listens as Rick Pollack, president and CEO of American Hospital Association speaks about the coronavirus in the Rose Garden of the White House on April 14. Hospitals have faced lost revenue due to cancelled elective procedures during the pandemic. 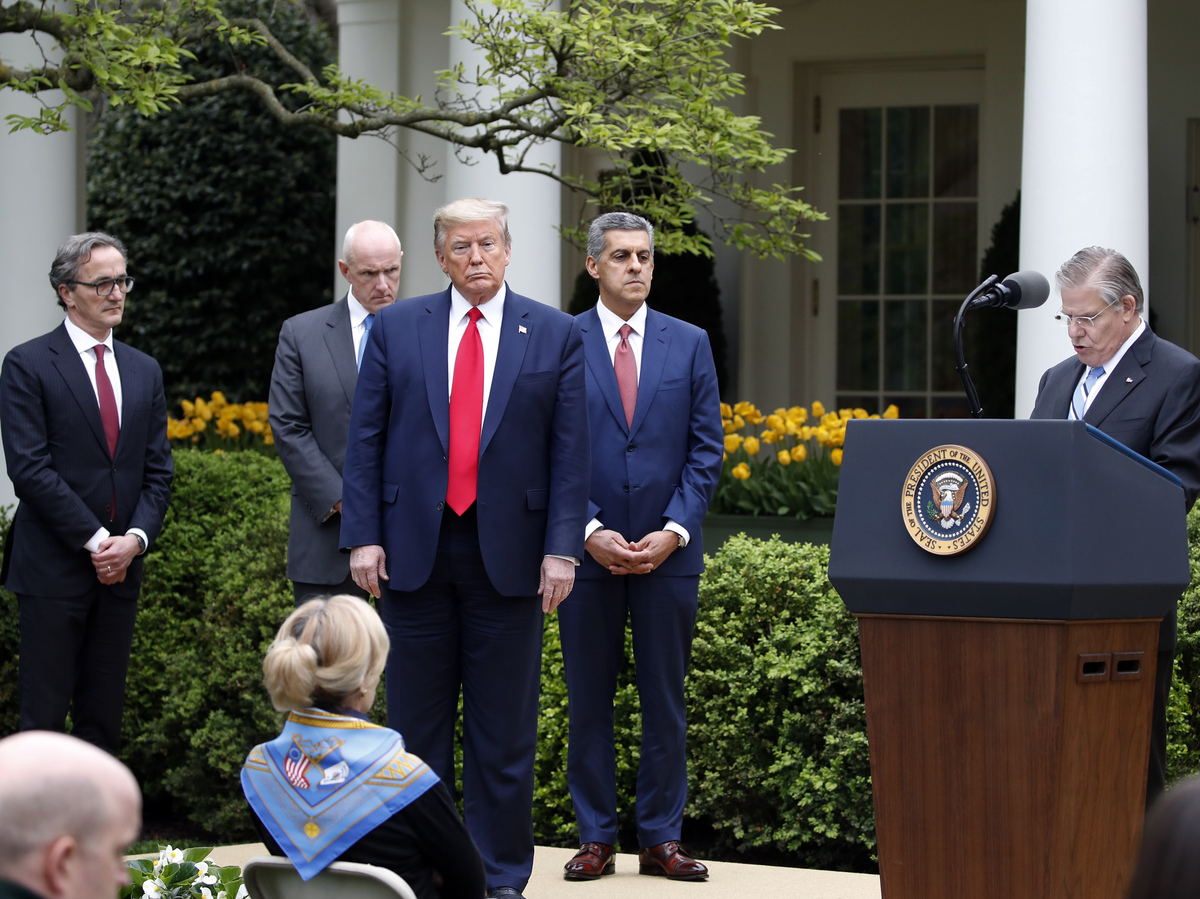 President Trump listens as Rick Pollack, president and CEO of American Hospital Association speaks about the coronavirus in the Rose Garden of the White House on April 14. Hospitals have faced lost revenue due to cancelled elective procedures during the pandemic.

Rozetta Ludwigsen, 64, works at a small hospital in Anacortes, Wash. She’s gone from working a 40-hour week to only a few days a month.

“I never thought we’d be in this situation where there’d be no work for us,” she said.

Before the pandemic, Ludwigsen was hoping to retire within the coming year. Now she may have to delay her plans for a year or longer.

In eastern Washington state, Shawn Reed, an ER nurse at MultiCare Valley Hospital, said she is sacrificing her own hours for people who need the money more.

“When I look at a nurse…who’s pregnant with her third child and I know she’s going to need hours now, I am willing to fall on that sword,” Reed said. “I can do it here and there, but I certainly can’t do it long term.”

The Emergency Nurses Association (ENA) has created a relief fund for its members who are struggling financially. Hundreds of their members have already applied for help.

“Looking at it from a long term perspective, you have to worry about the profession and what’s the impact on the profession,” said Mike Hastings, the president of ENA.

A question of funding

The federal government has been distributing a portion of the $100 billion Provider Relief Fund to hospitals and other providers, as part of the Coronavirus Aid, Relief, and Economic Security (CARES) Act. Among the funding is a $10 billion allocation each for rural hospitals and pandemic hot spots.

Nickels, of the AHA, says it’s too early to tell the effect of emergency federal funding targeted for hospitals, and whether those funds will help hospitals retain workers.

But Randi Weingarten, president of the American Federation of Teachers, which is also the nation’s second largest nurses’ union, says it’s clear the federal funding is far from enough. The union has identified at least 200 hospitals nationwide cutting worker hours, mostly in the form of furloughs, according to Weingarten.

Even as the pandemic tapers off in some places, hospital revenue losses will take time to correct, especially because hospitals may face a potential “payer mix” problem before Americans go back to work. Many people who lose their jobs will also lose employer-sponsored health insurance, and those private plans reimburse providers at much higher rates than publicly funded plans like Medicaid and Medicare. 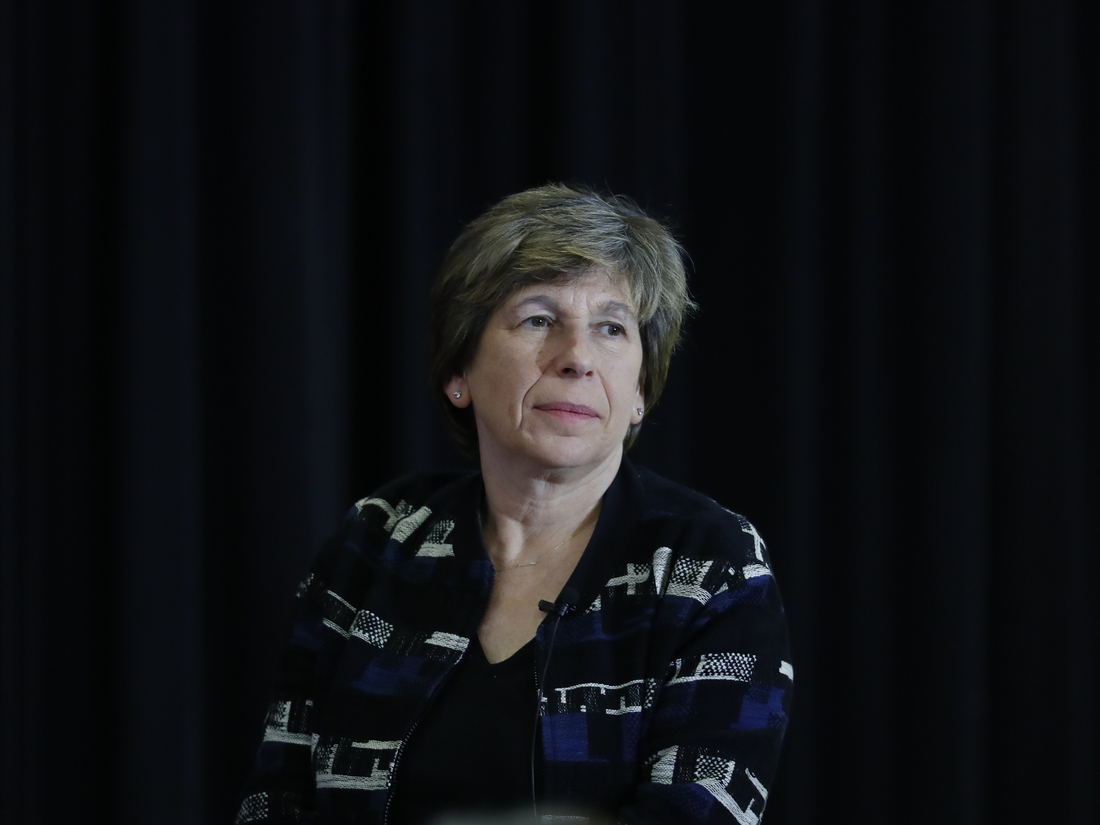 Randi Weingarten, President of the American Federation of Teachers, the second largest nurses’ union, listens during a town hall meeting in Detroit on May 6, 2019. Weingarten says her union has identified at least 200 hospitals that have cut worker hours amid the pandemic. 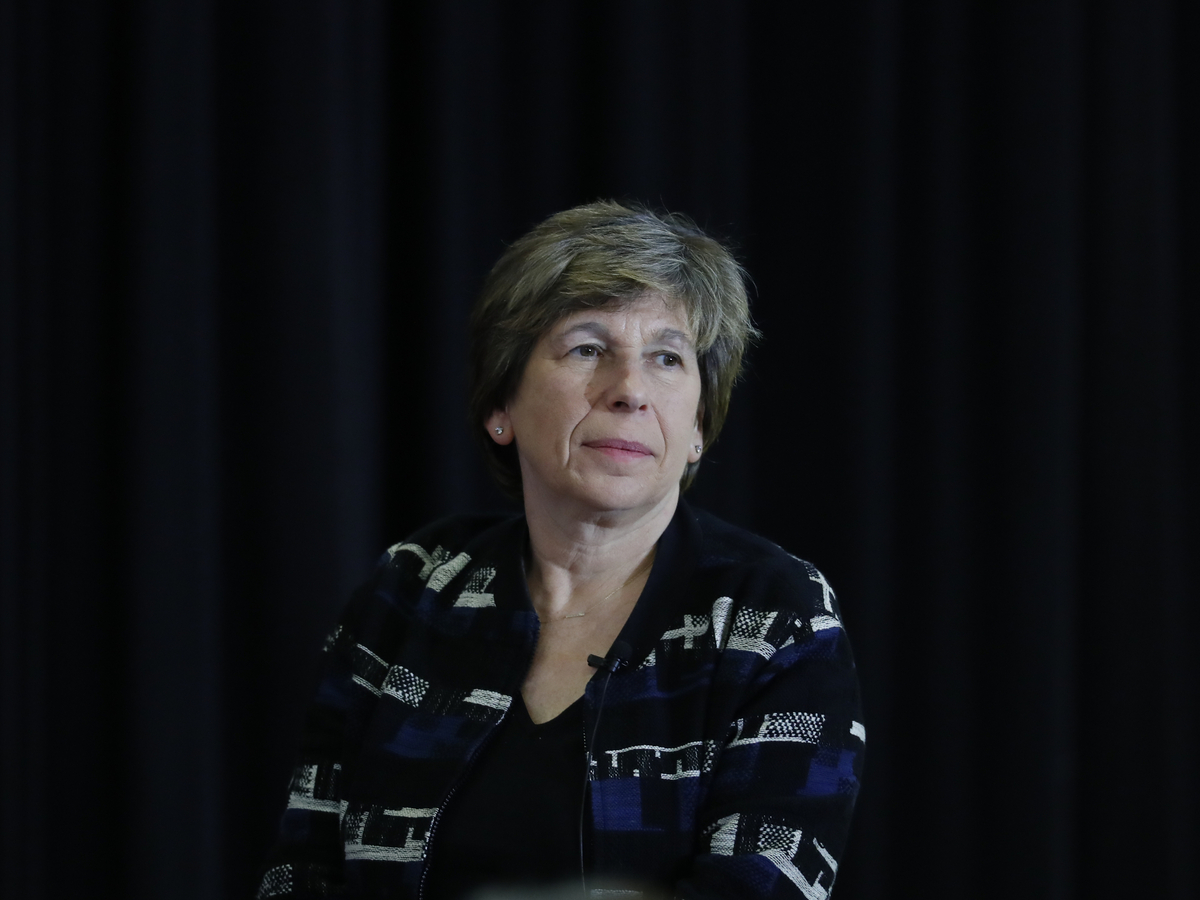 Randi Weingarten, President of the American Federation of Teachers, the second largest nurses’ union, listens during a town hall meeting in Detroit on May 6, 2019. Weingarten says her union has identified at least 200 hospitals that have cut worker hours amid the pandemic.

“Even if [patients] do go back to the hospital, they’ll be paying a lot lower rate than they did when they had insurance through their employer,” says Christopher Whaley, a policy researcher with the Rand Corporation.

Weingarten says this crisis is an opportunity to rethink how the American hospital system is funded.

“Instead of reduction of the workforce, there should be a reallocation of work,” she says. “Thinking innovatively and resourcefully, health care workers should be cross-trained to work in areas of the hospital that are overloaded like ER or ICU. Displaced workers could be trained and paid to staff a robust trace-and-isolate program as society reopens.”

Without that reallocation, some nurses still in the hospitals are taking on extra tasks in their already grueling 12-hour shifts. They’re mopping rooms, changing sheets, taking out the trash and arranging rides because the people who once did that are gone.

“We’re kind of jack-of-all-trades at this point,” said Amy Erb, a nurse at California Pacific Medical Center in the Bay Area in northern California and a California Nurses Association Board member. “We’re being phlebotomists, drawing labs. We’re being social workers. We’re being psychologists.”

Then there are the days she’s had her hours cut which makes her worry about the future. So far her hospital has worked to avoid layoffs.

One nurse in a Detroit area hospital says all the extra hours she once worked have disappeared.

“Our job title expanded exponentially,” she said. She spoke on the condition of anonymity for fear of losing her job. The one thing she thought she had was job security. “Then the layoffs started coming and I was like ‘never mind.'”

She now often cleans the rooms, answers phones because the staff who did that are gone.

The financial stresses are compounded by an already stressful and terrifying time for healthcare workers.

“People were dying left and right,” she said. “The way we were treating them then is different than now, maybe they would still be alive if they came in today…it eats me up at night.”

She spent the first month of the pandemic crying every night.

Her unit is a COVID-19 positive unit. Things are easing up now, but she still works with those COVID-19 patients everyday. She’s less afraid, she spends more time in the patient’s rooms. She is their support system, their link to their families and their nurse.

Last week Palomar Health in north San Diego County in California laid off over 300 people. But the workload didn’t change, it just shifted to people like Sue Phillips, a critical care trauma and rapid response nurse.

“We have very limited physical therapy, speech therapy, occupational therapy and that’s part of our care team, so that’s now going to fall on to our end to be providing that care.” she said. “It’s uncharted territory. In my 25 years of nursing, I’ve never seen anything like this before.”

When a patient came in recently with broken bones, the doctor couldn’t turn to the orthopedic technicians. Those technicians had been laid off. So Phillips found herself putting traction on a hospital bed, a pulley system that slowly lifts and moves the broken body parts.

“I’ve never had to do that before,” she said. “The operating room staff was bare-boned staff, so there weren’t enough people to assist the physician in doing the surgery that day.”

She said she was worried she’d make a mistake. Also gone is the lift team that used to help Phillips pick up and turn patients. All of this, she said, adds stress to her job.

Meanwhile, her family is afraid to be around her because of her work. She’s staying away from her husband. On their 30th wedding anniversary Friday, they’ll celebrate apart.

“We’ve been doing this now for six weeks. Where’s the end? When are things going to get a little bit back to normal?” she asked. “Now we’ve had these huge layoffs.”