In the words of Kootenai Health pulmonologist and critical care specialist Dr. Todd Hoopman, “Our people know how to take care of our people.”

The generosity of community members embodied this sentiment Saturday night during the Kootenai Health Foundation’s virtual Festival of Trees Gala, when attendees relished in the giving spirit of the season by grossing a grand total of $418,061.

Add this to a huge matching gift of $500,000 from Gozzer Ranch homeowners Michael and Iris Smith, and the foundation is well on its way to raising $1 million to support COVID-19 frontline workers and patients through the Health Care Heroes Fund.

“It touches me deeply, it really does, especially having gone through this year working at the hospital … talking to people who work with COVID patients and hearing the stories,” Kootenai Health Foundation President Julie Holt said Sunday. “The silver lining to me is seeing how the community has responded to our health care heroes.”

From living rooms, Coeur d’Alene Resort rooms and viewing parties across North Idaho, about 200 guests participated in the 32nd annual and first virtual Festival of Trees Gala. Emcees Justin Schorzman and Rose Backs recorded the evening from the Hagadone Event Center as they showcased brilliantly decorated trees up for auction and cheered as bids rolled in.

The emcees reminded those participating that every dollar would be doubled, thanks to the matching gift from the Smiths.

“Every single dollar here, it’s not money spent, it’s money invested,” Backs said. “I can’t think of a better way to invest right now than in the continued work of Kootenai Health Foundation.”

Michael and Iris Smith are Miami residents who spend time at Gozzer Ranch in the summer. Michael is the founder, CEO and majority owner of Freeport LNG in Houston, which owns and operates the seventh-largest liquid natural gas export facility in the world and second largest in the U.S. Iris is a Tony Award-winning Broadway producer and a producer of full-length films. She serves on the National Committee for the Performing Arts at the Kennedy Center in Washington, D.C. Married for 41 years, the Smiths are actively involved in a variety of nonprofit philanthropic efforts focused on health care, education and the performing arts.

Michael said he and Iris “believe in supporting hospitals in the communities where we live.”

“Since we spend part of our summer in northern Idaho, and are very impressed with the quality of care at Kootenai Health, we feel it’s important to include Kootenai Health in our philanthropic giving,” he said.

She said she was really pleased with how well the foundation’s virtual Festival of Trees Gala went, especially considering it was held virtually for the first time due to COVID-19.

“People were still there for us,” she said. “A lot of people were disappointed we couldn’t have the in-person event, and so were we, but I think under the circumstances we made the best of it.”

Giving for the Festival of Trees to support the Health Care Heroes Fund will go through Dec. 31. 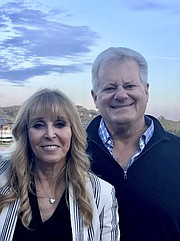 Planet Fitness Expands Board of Directors with Two New Appointments