Four out of 5 families at the school reported at least one parent out of work. Restaurants were closing, construction jobs had temporarily stopped, and caretakers and house cleaners were idled. As students and their parents slid deeper into poverty, school officials saw a level of desperation that seemed to have no end and no bottom. It had gripped the quiet East Oakland neighborhood surrounding Esperanza, and quickly spread throughout much of the Bay Area.

“We had started doing wellness checks,” Principal Cristina Segura said. “And within the first couple weeks we learned … how much our families were struggling, and how much they were going to be dependent on any sort of assistance.”

While the school rushed to save its students, the city grappled with devastation on a larger scale. This month, Oakland Unified School District doubled the number of meal sites on its campuses, from 12 to 24. It was the only way to address the magnitude of need and accommodate families who didn’t own a car, said district spokesman John Sasaki.

Oakland has distributed more than 2.3 million student meals, 300,000 adult meals, half a million pounds of groceries and 400,000 diapers since mid-March. 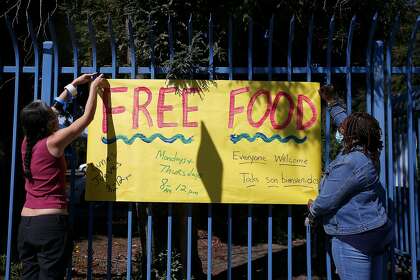 Even as the region learns to live with COVID-19, it’s already facing a new scourge: Hunger that may grow as rapidly as the virus that triggered it. When the U.S. Census Bureau surveyed 3.7 million randomly selected Bay Area households May 28-June 2, more than a third of them — 1.4 million — reported a lack of consistent access to affordable, healthy food. Of the 1.4 million, 880,919 had enough food, but not the type they wanted to eat, while the rest sometimes or often didn’t have enough to eat.

The ratio was higher for families with children, 570,234 of whom suffered from food insecurity, out of about 1.4 million surveyed.

Though government stimulus money has helped, the burden of feeding hungry families has largely fallen on nonprofits, churches and especially the public schools, many of which boosted their own social safety nets when the pandemic hit. Several, including Oakland, rely on philanthropy to supplement federal and state dollars.

Since schools closed, the San Francisco Unified School District has given out more than 1.5 million meals at grab-and-go sites and via deliveries.

With that, a new kind of drive-through — in which cars pull up to rows of cafeteria tables in school play yards — became a feature of the Bay Area landscape. Districts that usually provide meal service during summer will continue or even beef it up amid COVID-19. San Francisco Unified is maintaining 18 school sites and five community locations, while San Jose Unified — one of several districts in the city of San Jose — manages 10 sites. West Contra Costa Unified School District hands out 3,000 meals a day from its most active location, Richmond High School — one of nine campuses and 13 community locations that will continue feeding students over summer.

One of Oakland’s new sites is Esperanza, which sits on a block of low-slung houses with shorn lawns and chain-link fences. It’s deep in the flatlands of East Oakland, an area belted by the I-880 and I-580 freeways, where poverty is rampant and neighborhoods are close-knit. Residents sit on porches and bicycles zip down the street on scorching summer days. Flowers and vegetables bloom wildly in the school’s garden, and in the mornings, the crow of a rooster pierces the air. 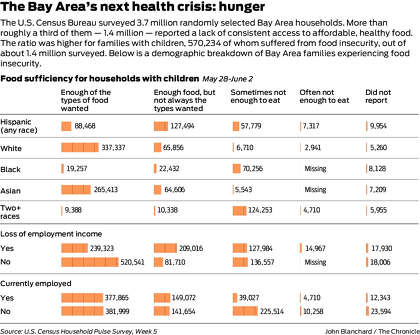 In a community ravaged by job loss, the school became a lifeline. Teachers raised $50,000 for needy students through a GoFundMe campaign, and gave out 180 Google Chromebooks to students who lacked computers, draining the school’s supply of electronic devices. They even intervened to help families facing evictions, by connecting them to tenant organizations and getting on three-way phone calls to translate for parents who spoke only Spanish.

Starting in April, staff from the district’s nutrition services department parked a food truck at Esperanza every Thursday to hand out prepared meals. But it wasn’t until June that the school became a full-on distribution hub, where twice a week, Segura and other staff give away boxes of produce, along with plastic bags stuffed with pizza, corn dogs and other frozen foods.

Families trickled in shortly after 8 a.m. on Monday, mostly in cars, though some walked, pushing baby strollers or luggage dollies to carry the groceries.

Florentina Sen gripped the hand of her son Wilmer Martinez, a fourth-grader at Esperanza. A single mother, she lost her job cleaning houses in March, and now struggles to pay their $800 monthly rent.

Behind her stood Mauricio and Teresa De Sosa, who immigrated to the U.S. from El Salvador last year. They moved to a home on Rossmoor Avenue, not far from Esperanza Elementary, which two of their three daughters attend.

When the coronavirus swept in, Mauricio could no longer find regular work as a day laborer, so they turned to the school for help. Teachers at Esperanza gave them a Google Chromebook, which proved useless because the family has no home internet connection — a common problem in low-income communities. Teresa lends her daughter a cellphone to do homework. 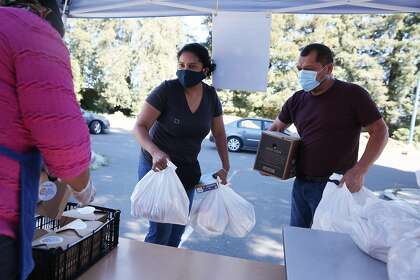 Angelica Santillan emerged from a white Lexus sedan with an Oakland Raiders bandanna tied across her face. Her son and daughter played in the back seat of the car.

Santillan characterized herself as the breadwinner of her family, since her income renting out party equipment had long covered expenses for her husband and children. But she’s been out of work since March 3. Her husband returned to his construction job in late May, making barely enough to pay rent for their home on 97th Avenue, a few blocks from the school. They rely on a patchwork of assistance programs for everything else.

“Everything has just been very difficult,” Santillan said in Spanish as she approached the cafeteria tables stacked with bags and boxes.

Segura, the school principal, is determined to help her students surmount what could be a painful autumn. Yet she also worries about the school’s ability to sustain families who face a whole universe of problems. Even before the pandemic, many of them only had one parent employed, mostly in low-paying jobs such as restaurants, construction or grocery stores. Some parents are undocumented immigrants who don’t qualify for most forms of government assistance. At least one family had drifted in and out of homelessness before COVID-19 devastated the local economy.

“I think it’s going to be really hard for those who were already struggling (before the pandemic) to bounce back,” said Kate Cheyne, associate director of research for the Alameda County Community Food Bank. She argues that without dramatic measures like a prolonged moratorium on rent or evictions, many of these families could lose their homes.

Some experts wonder whether families should have to rely on schools and food banks as a primary source of nourishment. Waiting in line for food takes time out of a person’s day, and can expose a person to the coronavirus.

“It’s just more efficient to put the money in the hands of parents,” said Stacy Dean, vice president for food assistance policy at the Washington, D.C.-based Center on Budget and Policy Priorities. 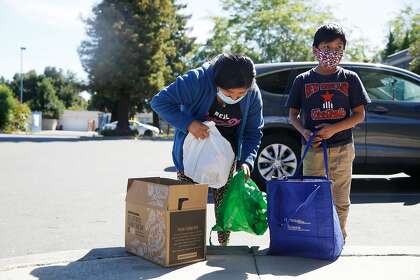 She sees hope in a federal program that directly transfers money to families who are eligible for free or reduced-price school lunches. Called the Pandemic Electronic Benefit Transfer, it offers $5.70 for each day that schools were closed.

“That’s an example of how you really move money,” Dean said.

Yet in the most poverty-scarred neighborhoods of the Bay Area, institutions like schools will keep working to help. Esperanza Elementary will add a new service this week: free baby diapers.

“That’s what’s amazing about my school — we really jump into action when there’s a crisis,” Segura said. For now, she and her staff will offer boxes of food every Monday and Thursday. Nobody is quite sure what will happen when the school year begins.

U.S. patients got medicine cheap in Tijuana. Now they struggle with border delays