Just in time for the home fitness craze, Exer has launched its AI-based coach that shows you how to exercise correctly at home.

The first product available now is the Perfect Plank by Exer iPhone on the App Store and on Product Hunt, said Exer CEO Zaw Thet in an interview with VentureBeat.

“Unfortunately, people can’t go to a gym now,” Thet said. “We started this a few years ago, and I think it is even more relevant now. As people accelerate into more digital forms of education for fitness, this will become increasingly even more relevant. We believe we can democratize fitness.”

Exer relies on edge-based AI (meaning it uses your smartphone’s computing power) and computer vision to power its motion coaching platform. It offers real-time audio and visual feedback via a smartphone (and its camera), on almost any type of human motion, without having a human in the loop. The mission is to help millions of people move, train, and play better.

VB Transform 2020 Online – July 15-17: Join leading AI executives at the AI event of the year. Register today and save 30% off digital access passes.

“The hardest part was doing deep learning for that model frame,” Thet said. “We use a picture to make the most educated guess about where 18 to 20 different joints are on your body at any given time. The second hard part is telling you what to do. What is the right form for that motion? We give you a correction on your form.”

The app uses your smartphone camera to capture your posture and movements. It then uses AI and machine learning to determine whether you’re doing exercises such as the plank the right way.

Finally, the app uses voice coaching to tell you how to fix your posture so you can get the most out of your home workout. It gives you instant feedback at a time when people can’t go to the gym for expert help, Thet said. Similar to expensive gear such as Peloton, the app gives you encouragement by showing you metrics and leaderboards to inspire you to do better.

More important than mobile motion coaching is the platform the company has built to programmatically decode correct and incorrect forms for any human movement. This Motion Engine platform is being opened up so any coach, trainer, or physical therapist can use it to create their own teams, upload their own movements, or add their own audio to what a consumer will hear and see on the phone.

Above: Exer provides you with a voice coach for your exercises.

Thet, a former partner at Signia Venture Partners, decided to leave his job in venture capital a year ago to head up Denver-based Exer. The company raised $2.5 million in seed money from Signia and also raised $300,000 late last year in funding from Colorado-based angels, Thet said. Last September, Exer moved from San Francisco to Denver.

Thet is a serial entrepreneur, having also cofounded and served as CEO of 4INFO, one of the first and largest mobile advertising platforms in the world. In 2011, he was selected as one of 10 entrepreneurs to serve on the United Nations Foundation’s inaugural Global Entrepreneurs Council, where he is now an emeritus member of the board.

Cook is the founder of Frontier Labs, which was acquired by Exer in 2019, and a founding member of Twitter’s mobile team, where for six years he helped build and perfect the app across every major mobile platform at mass scale. Prior to that, Cook served as the founder and CTO of Congress in your Pocket, a mobile platform that provides up-to-date, vital information about members of the United States Congress, the administration, state governors, and state legislatures. 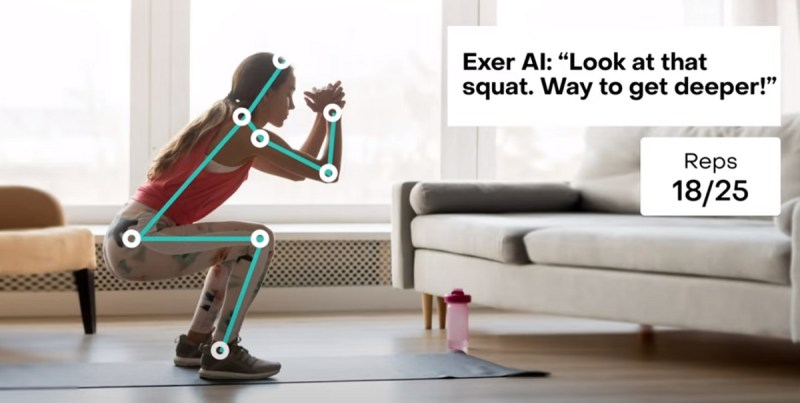 Above: Future coaches will tell you how to do things like the perfect squat.

Gehde has a background in kinesiology and fitness. The founder of e3 Fitness in Denver and a trainer and mentor for nearly two decades, he touts the e3 Program as a breakthrough that has helped dismantle barriers to maintaining an ongoing fitness plan. His training programs have helped everyone from fitness enthusiasts to professional athletes.

The app is free, and there will always be a base level of AI coaching that is free, Thet said, but the company will add premium paid features over time. He said there are many more apps, such as a physical therapy coach, to come. The company has 11 employees, all working remotely now.

“In the long run, we would like to deliver coaching for golf,” Thet said.

The role of diet in esophageal cancer