Dew was still fresh on the grass as Dana Harshaw set out evenly-spaced number tiles across a driveway one Saturday morning in Chapel Hill.

“Everybody’s spaced at least six feet apart,” she said. “We provide hand sanitizer and Clorox wipes if anybody needs it, but everybody brings their own props. We’re not providing props to anybody right now.”

Harshaw, the owner of Barre3 Chapel Hill, is one of dozens of fitness center owners in Orange County trying to keep business afloat during the coronavirus pandemic.

Gyms and fitness centers within North Carolina have been closed since March 16 following executive orders from Governor Roy Cooper. Phase 3 of the state’s reopening, which would allow gyms to open their doors, has been delayed three times now.

For several months, fitness center owners like Harshaw have been adapting to the changing landscape. Her business started off by offering online classes, but transitioned to socially-distant outdoor classes when state health orders allowed for groups of less than 25 to gather outside.

On the Chapel Hill driveway, over a dozen people participated in an outdoor fitness class. Yoga mats were spaced evenly apart and participants brought their own masks, wipes and fitness accessories to limit the chance of virus transmission.

“At the beginning of all this, we closed our doors and right away my manager and I knew we had to do something to keep our members engaged so we didn’t all of a sudden lose a ton of revenue,” Harshaw said. 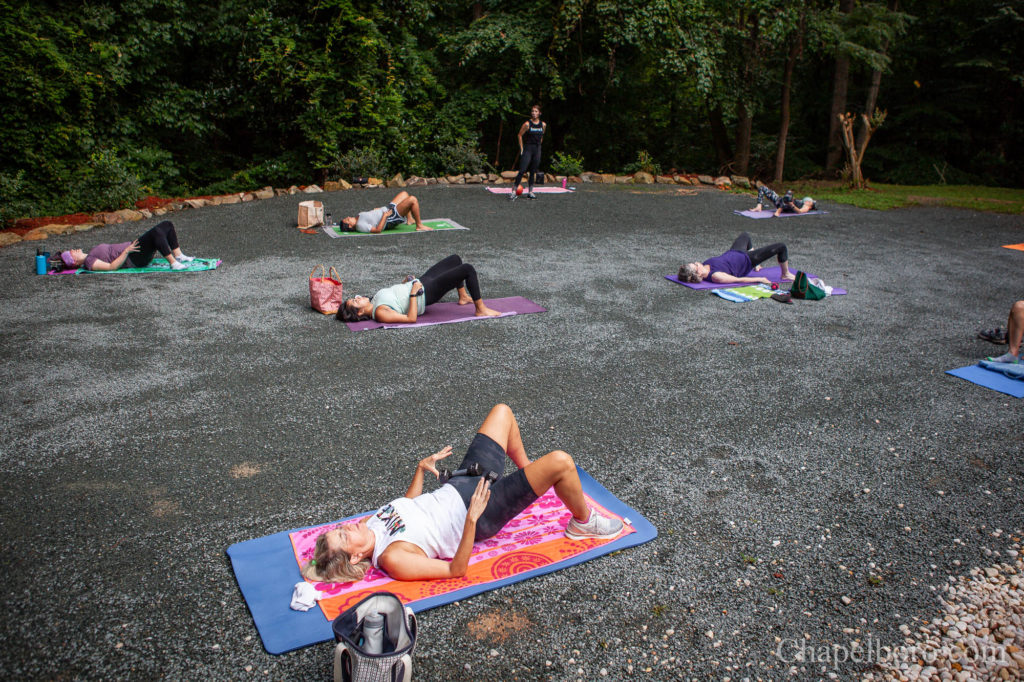 At the University Place mall, Crossfit Homeward owner Donna Benjamin oversaw a class with similar guidelines in place. Workers wiped down mats and weights with cleaning solution between classes. When sharing a squat rack, members gave each other space while completing the workout.

Benjamin said her business has implemented measures to ensure members conduct themselves in a responsible manner outside the fitness area.

“We developed a special waiver, we just basically call it our COVID waiver,” she said. “There’s probably eight items that need to be initialed on outside conduct, that sort of thing. We’re not telling anybody how to live their life, but if you want to come in and be around my members, then you know everybody’s got to be responsible.”

At the start of the pandemic, Crossfit used the mall parking lot for workouts. Since then, they’ve been able to use the space formerly occupied by the Weathervane restaurants. Benjamin said her business will continue to utilize the outdoor space, even if state executive orders regarding gyms are relaxed.

“For us, based on science, it is far safer to be outside than inside. The risk of transmission outside is much less than inside.” 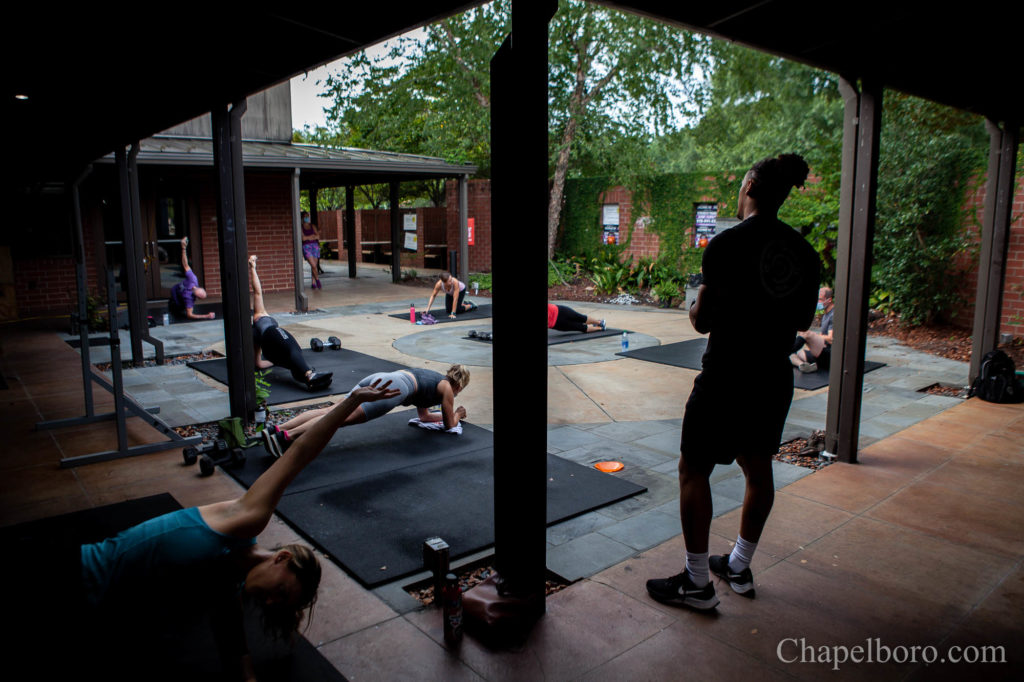 At CrossFit Homeward, mats are placed apart so members can distance themselves from each other. (Dakota Moyer/Chapelboro.com)

Benjamin elaborated she plans to buy heaters and additional lights so her members can get workouts when the temperature starts to drop later in the fall. But she said the decision to stick to outdoor workouts is one made for safety reasons.

“I don’t know what I would do if one of my members got sick,” she said. “That would be beyond devastating. So is it the best decision for the gym to stay outside? I don’t know. Is it the best safety decision? Yes. So that’s what we’re going to do.”

Lori Hernandez, the owner of Franklin Street Yoga, said this year has been especially hard on her business.

Normally, Franklin Street Yoga would be celebrating its 13th year in business. Now, Hernandez is asking for donations to ensure they can stay open.

“It’s interesting to feel that this year is probably the hardest year, harder than the first year when we opened because of the uncertainty and not knowing what’s going to happen,” she said.

Hernandez said while she’s heard of other yoga studios negotiating with landlords to delay rent or adding it to the back-end of their lease, she hasn’t had any such luck. Her studio has been closed since March 16 and has paid rent every month.

Additionally, Franklin Street Yoga has not seen new customers that normally arrive in the fall due to the university.

“We haven’t seen new people like we used to like when the students arrive or grad students move here, we have not seen that influx at all.” 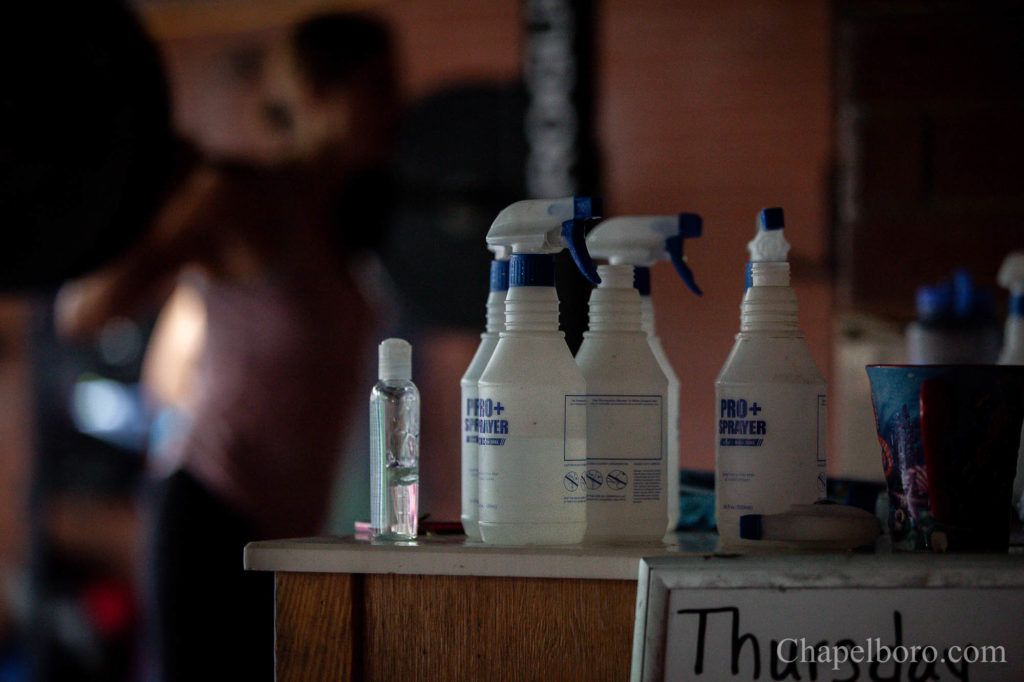 Weights and mats are sanitized with cleaning solution between workouts at CrossFit Homeward in Chapel Hill. (Dakota Moyer/Chapelboro.com)

In June, Governor Cooper vetoed a bill that would have allowed fitness centers to reopen at 50 percent capacity and require they follow social distancing and cleanliness rules.

“Tying the hands of public health officials in times of pandemic is dangerous, especially when case counts and hospitalizations are rising,” Cooper said in his veto message. “The bill could restrict leaders who need to respond quickly to outbreaks and protect public health and safety.”

Phase 2 of North Carolina’s reopening is set to expire on September 11, but all three business owners said they expect the order to be extended yet again, keeping gyms and fitness centers closed.

“We are in Chapel Hill. The [positive COVID-19 cases] have obviously gone up,” said Hernandez. “I just don’t see them opening gyms or yoga studios possibly until January or February or even March.”

For Barre3 Chapel Hill, Harshaw said she is already preparing for whenever her doors are allowed to open once again.

“I have already put several measures in place, such as air scrubbers in my studio with UV lights to essentially eliminate contaminants in the air,” she said. “I’ve already contracted with a company called Enviro-Master. They have provided hand sanitizer stations in my studio, touchless tower dispensers. When my doors reopen, they will do a weekly vaporizer service to disinfect high touch areas.”

Chapelboro.com does not charge subscription fees. You can support local journalism and our mission to serve the community. Contribute today – every single dollar matters.