Michael Phelps is notorious for two things. Both holding the world record for most gold medals ever won and going through intense training to do so. In his 2008 run where he took gold for the 8th time, he bragged to teammates that he was eating close to 12,000 calories everyday. In this issue of Viking, three brave staff writers find out how they stack up against the olympian all star in trying to complete his eating challenge.

Swimming is a sport that takes tremendous athletic ability. It uses muscles you never even knew existed and pushes them to the max. With massive outputs of athletic performance, one needs massive amounts of fuel. A car cannot run without gas right? That is why Michael Phelps, the 23 time Olympic gold medalist, recalls spending half of his day eating. During his 2008 run, he stated that he was eating around 12,000 calories a day! Which is close to five times the amount of a normal adult male at 2,500 calories. Phelps needs this to fuel his training and competition, as swimming is such a grueling sport. Countless people on social media have tried to complete the Phelps Calorie challenge and most have failed. To see how hard this act really is, three brave Viking staff members, Jack Elarde (‘21), Josh Butler (‘22), and Justin Byer (‘21), will take on this challenge to see how they stack up against the legendary Olympic athlete.

When the summer started, I felt as if I hadn’t been gaining any weight, feeling unmotivated to get out of bed and get something to eat, along with getting out of bed in general. My family put in a home gym that I had started using, which made me start to feel better about my physical and mental health. My friend and I had talked about having weight goals for the beginning and end of summer. My goal was to gain 20 lbs over the summer and with enough dedication, and motivation from my peers, I was able to complete the mission I had set out for. Being able to try and successfully complete this 12,000 calorie challenge was a big task, as if I had to eat a full course meal almost every hour along with multiple snacks in between.

My plan was to stop eating the night before the challenge so that I would be extremely hungry when I woke up. I started my day with 10 eggs (with ketchup —obviously), toast with peanut butter and honey, a protein bar and loaded protein shake. This held me over until lunch, where I consumed a triple cheeseburger and chocolate milkshake at In-N-Out. By the end of lunch, I was already on track for 5,000 calories consumed. One aspect of the challenge that was tough for me was that I am typically the type of person that tends to eat more snacks than meals throughout the day, but for this challenge I had to mix my strategy. When a lot of people typically try these types of challenges, they would stuff their face every meal, making it hard to keep consuming, force feeding themselves. Burning off calories throughout the challenge made it easier on my stomach, whether that was by weightlifting or playing basketball. By the afternoon, I had eaten as much as I would on a normal day. I had told my girlfriend about this challenge and she insisted on helping me succeed, constantly putting food in front of me, making food for me and rooting for me to go eat more. I ended up eating 3 more meals that were approximately 1,500 calories each, with many more snacks to come. Towards the end of the night, I was stuck in a food coma, with regrets flowing through my head, and stomach aches coming and going. I ended the challenge consuming 8,500 calories—which for me is a huge number of calories, considering that I only weigh 170 lbs.

Every day for the past eight months I have been trying to eat as much food as I can in order to gain weight for football. My totals run at about 8,000 calories a day, which is no joke. I struggle to eat that many calories a day and when I say struggle, it is a struggle. Before I talk about my experience, I would just like to give a huge deal of respect to Mr. Phelps. Coming from another athlete who tries to eat a lot of food, try eating 4,000 calories and see what happens. Then imagine eating three times that amount. 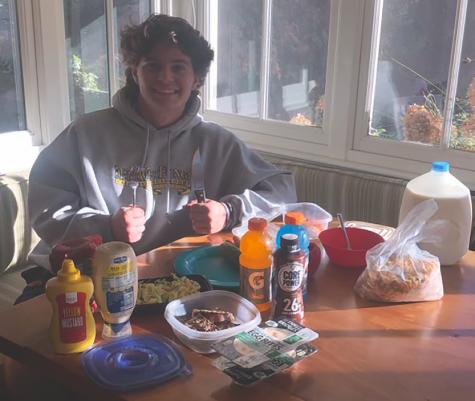 My experience started early in the morning, because if you actually are going to eat that many calories in a day, you have to eat frequently, which is more difficult to do if you sleep in. I woke up at seven and headed down stairs for breakfast. My breakfast totals were around 3,000 calories. Let’s just say my love for eggs has diminished after eating ten of them at a time, along other proteins and carbs. I tried to have three or four meals that were 2,500 calories or above, and I also ate as many snacks as I could in between meals. I felt full the entire day. Not a second went by where I wasn’t uncomfortable. By dinner time, I had consumed roughly 10,000 calories, and I knew that if I wanted to get to 12,000, it was gonna be a grind. Despite a final push to complete the challenge, I finished the day at 11,250 calories, and unable to move. The experience really makes you realize that these glamored lives of these legendary athletes typically are not as nice as they seem. Everyday you have to be super determined and focused. Also, I could not imagine doing this and going to a practice where I actually have to move. Most people suggest doing exercise while trying this challenge helps a lot, but I was bed-ridden the entire day.

Over the summer my sleep schedule and diet was messed up because I would go to bed super late at night and wake up in the middle of the afternoon. This caused me to sometimes miss a meal and only eat two meals a day. Because of this I lost a little weight. When I realized that I lost weight because I was only eating two meals a day I made sure to start eating more food. I have tried to eat 3,000 calories a day. Although I have been maintaining a 3,000 calorie diet, eating 12,000 calories seems nearly impossible. I started the day off with scrambled eggs with cheese, sausage, an orange juice, and a protein shake. This put my calorie count at 2,160. Between breakfast and lunch I had some tortilla chips which put my total to 2,860. At this point I was feeling pretty full but then I went out and played some basketball and that helped me gain some of my appetite. For lunch I had a salami sandwich with cheese, two slices of pepperoni pizza, pasta, and some lemonade. 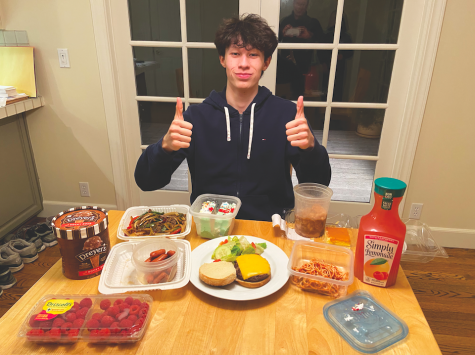 That meal put me at 5,094 calories. At this point it was still the afternoon and I was on a good pace to complete the challenge but I was stuffed. On top of being stuffed I wasn’t able to exercise and burn some calories between lunch and dinner so I was pretty full going into dinner. Despite this I managed to gobble down two hamburgers, pasta, sweet potato fries, and some lemonade. After dinner I was at 7,379 calories. After dinner I was in a food coma and could not eat anymore. To finish off the day I had a yogurt and some ice cream which put me at a grand total of 7,820 calories for the day. Reflecting on the day this was by far the most food I had ever eaten. Although this wasn’t the most pleasant challenge, I now understand the crazy things world class athletes like Michael Phelps do to stay on top of their game.

Weight loss diet: Fatty foods that are healthy and great for weight loss

Could your favourite foods be making you feel sick? An elimination diet can help

Music in Medicine: The joy of healing music | Health

Map My Run to Nike Training Club: The best fitness apps to try out in 2021