A diet of beans, Evangelical Focus

(…) and Machir the son of Ammiel from Lo-debar, and Barzillai the Gileadite from Rogelim, brought beds, basins, and earthen vessels, wheat, barley, flour, parched grain, beans and lentils (2 Samuel. 17:28)

Beans are annual plants belonging to the Fabaceae family which are only mentioned twice in the Old Testament (2 Samuel 17:28 and Ezekiel 4:9).

In the first case, it was in relation to some gifts brought to David, as used to be one of the hospitality customs among the Hebrews, and other Semitic people groups. In the second case, the reference is to the special bread that Ezekiel had to make as an action symbolic or prophetic of the evils that would descend upon Judah and Jerusalem, just before they were devastated by the troops of Nebuchadnezzar.

The Hebrew word pol, which literally means “being thick”, is the term that is used in both cases to designate this vegetable. It was translated into Greek as kýamos, and in Arabic as ful. Beans (Vicia faba), along with haricot beans (Vigna sp.) and broad beans (Phaseolus vulgaris y Phaseolus molliflorus) have been grown in Israel for millennia, and formed part of the Hebrews’ staple diet. During hard times and famine, they would mix beans with cereals in order to make coarse bread (Ezekiel 4:9).

In Egypt beans were also known and grown for human consumption since time immemorial. They were planted in November and reaped in mid-February. The stems served as fodder for cattle, sheep and goats, as well as for camels.

Cicero refers to the use of beans in religious rituals, especially among the Pythagoreans. There are a number of authors, both in Greece and Rome, who describe a range of recipes based on beans and pulses. Pliny the elder likewise draws attention to the fact that bean-based paste played a significant role in sacrifices offered to the gods. It was believed that beans somehow contained the souls of the deceased, which is why they formed part of the offerings made to the gods [1]. 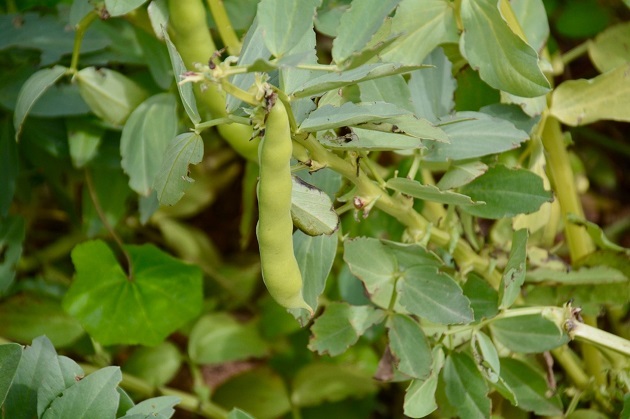 The seeds contained within beans are choc-full of nutrients, including carbohydrates, fibre, proteins, fat, vitamins (A, B1, B2, C and niacin), as well as a range of mineral salts (calcium, potassium, phosphorus, magnesium, copper and iron), all of which makes them suitable for both human and animal consumption.

That said, when eaten with the skin surrounding the seeds, they can be hard to digest. For that reason, they are not very highly appreciated in many regions, as is reflected in the Spanish saying: “Beans are good for pigs”. [2] The bean plant originated in the Mediterranean Basin, but then spread to central Asia. Nowadays, however, beans are grown in Australia, China, Egypt, Ethiopia, Europe and some Latin American countries.

The Biblical text mentioned earlier in Ezekiel (4:9-17) refers to the prediction made by the prophet concerning the desolation that was about to be visited upon Jerusalem, the same desolation described in Lamentations chapters 4 and 5, whereby he symbolically acts out the prophecy that God had revealed to him. In order to make the people understand the fate that awaited them, Ezekiel has to subject himself to a poor diet, of low nutritional quality, seasoned and cooked in a way intended to disgust him, and contrary to the prescriptions of the Mosaic law.

He must eat a mixture of products that were regarded as more fit for animals than for humans: wheat, barley, beans, lentils, millet and oats. This was a mixture of good and bad seed that the Israelites were forbidden to grow together in the same field (Lv. 19:19), possibly on account of the pagan connotations relating to the fertility rituals and orgies that were practised by neighbouring people groups. Besides, he had to eat very small quantities of this food, and strictly limit the amount of water he drank. This meagre diet was intended to show the Hebrews the reality of the calamities that awaited them and which, according to Jeremiah 37, actually occurred during the siege of Jerusalem by Nebuchadnezzar’s armies.

And what was the reason for this dramatisation? Why did Ezekiel have to endure this near-starvation? Was there not enough food in Babylon, plenty of excellent bread and magnificent springs of crystal-clear water?

The human being will hardly ever accept divine judgement. We refuse to acknowledge our own wrongdoing and accept its consequences. No one wants to be judged for their actions, and even less to be condemned. Nevertheless, there are times when God requires austerity of his people in order to bring his eternal purposes to fruition. Preaching this message will almost always require us to deny ourselves. In a world racked by injustice, evil, irrational wastefulness and unrestrained contamination of the planet, as ours is, Christians need to voluntarily opt for austerity and to set an example of simplicity to those who do not share our faith. Sometimes, though we balk at the idea, we must be prepared to accept a “diet of beans”.

Mental health: I did notice an increase in my anxiety in the lockdown: Haniya Khan, a mental health warrior and artist

Healthcare workers just as thankful for patients this holiday season